I, along with two of my friends, reached the Bandra Kurla Complex near NSE building for the event as scheduled at 6:30 am for Registrations. We were running the 4.5 Kms power run.

The event had a decent turnout and there seemed to be quite a few runners filled with lots of zeal and energy. We all geared up for its FLAG OFF around 7:30 am.

After a round of warm-ups and loud music coupled with dance from Zumba fitness, the event finally flagged off at around 8:00 am when the sun was already beaming up and had the city of Mumbai in a frenzy of pace and heat.

The event arrangements were not what one would expect especially if you have brand names like NSE and CNBC TV 18 hosting them, but it was merely a 4.5 Kms run, so I kept the shoes on and kept pushing through the crowd which was surprisingly very disorganized.

This was my second run at a power run marathon (First one being a 7 Kms Green run at Hiranandani Thane Half Marathon – Read post here LINK) and this time I clocked in at 32 Minutes with a distance of 4.5 Kms with an average speed of 11:21 Minutes / Mile and best speed clocked at 6:14 Minutes for 1 km during the 4.5 Kms run. I used the Endomondo app for tracking the run with GPS.

It was also surprising to note that there were quite a few runners who skipped the barriers and cut short their running frivolously and presented themselves to the crowd as though it was a fun thing to do. I just did not get it! Why be a part of a running event or a marathon especially for a distance as small as 4.5 kms and cheat in it. Anyway, there were few randomly spaced volunteers who were lost most of the time themselves, but there were few, who were however in sync with the event that was going on. These volunteers tried to call these trickster runners, but they paid no heed and kept cutting short the barriers openly anyways and worst, laughing it off too.

Finally as I saw the Finish line, we were in for a beautiful surprise, as there was a rain shower that you had to pass through to get to the finish line. I am guessing with the roaring heat in Mumbai, everyone was more so eagerly looking forward to it.

As we were leaving the arena, the security guards were stopping many runners and telling them to compulsorily stay back for another fifteen minutes till the event prize distribution etc was completed. Obviously, we were quite drained out and seriously hunting for some water to drink and we left from there as we excused ourselves politely.

Overall, it was not a very enjoyable experience unlike the StanC or the Hiranandani Marathon, but I would hate to blame the event because of few haphazard runners and just a handful of poorly chosen volunteers. I have loved running since some time now and would not mind another marathon in the coming month too. But, I do hope there is water through the route for runners to drink & also that it starts around 6:00 am or at least by 6:30 am. Most importantly, I really wish for the “host” of such events to cut short on his or her ramblings about what usually seem to be a set of extremely poorly chosen jokes and puns and for them to just get on with the Marathon. Let those who enjoy these random uneventful and tedious sessions prior to the start of such marathons, stay back and listen to them while the rest of us can, well, simply start running!

As we left the arena, we were given a goodie bag each which had mini nutri-bars, a tee that might fit young teenage kids, but to balance this poorly chosen goodie bag out, we were also handed over a refreshing Go Flavoured Yogurt that did the trick. Its not always the price of the things or the gifts, sometimes, it needs to simply make sense to the event and its participants too.

We finally found a table near the exit that had lots of water bottles, we picked up a bottle each and headed towards the car parking area and drove off into the blazing heat back towards home.

As I reached back home, few of my friends asked me about my recent obsession with running, with my daily running habit early morning and about Marathons in general. So I thought of sharing this small snippet from Wiki about Marathons.

What is a MARATHON?

Pheidippides hero of Ancient Greece, is the central figure in a story that was the inspiration for a modern sporting event, the marathon.

The traditional story relates that Pheidippides (530 BC–490 BC), an Athenian herald , a “day-long runner” was sent to Sparta to request help when the Persians landed at Marathon, Greece. He ran about 240 km (150 mi) in two days. He then ran the 40 km (25 mi) from the battlefield near Marathon to Athens to announce the Greek victory over Persia in the Battle of Marathon (490 BC) with the word νικῶμεν (nikomen[9] “We have won”) to then collapse and die.

The Battle of Marathon was a watershed in the Greco-Persian wars, showing the Greeks that the Persians could be beaten; the eventual Greek triumph in these wars can be seen to begin at Marathon. Since the following two hundred years saw the rise of the Classical Greek civilization, which has been enduringly influential in western society, the Battle of Marathon is often seen as a pivotal moment in European history. The battle is perhaps now more famous as the inspiration for the marathon race. Although thought to be historically inaccurate, the legend of the Greek messenger Pheidippides running to Athens with news of the victory became the inspiration for this athletic event, introduced at the 1896 Athens Olympics, and originally run between Marathon and Athens.

The marathon, as a real sporting event, is a long-distance running event with an official distance of 42.195 kilometres (26 miles and 385 yards) that is usually run as a road race. The event was instituted in commemoration of the fabled run of the Greek soldier Pheidippides, a messenger from the Battle of Marathon to Athens. 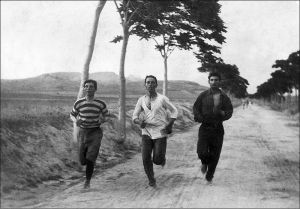 The marathon was one of the original modern Olympic events in 1896, though the distance did not become standardized until 1921.

Why do I run? Well, honestly, it helps me build tremendous discipline on a daily basis as I train each day too. My goal is not to be the fastest, but to be a part of every marathon possible and finally some day to actually run a FULL marathon!

Do you run in Marathons? Have you been a part of any such events or are planning to do so? Do share your experiences with me here. Would love to hear from you.

This site uses Akismet to reduce spam. Learn how your comment data is processed.

Visit My Website ananthv.com to know more about Digital Marketing and Corporate Training

Posted by Ananthanarayanan Venkateswaran on Monday, May 7, 2018

Ambidextrous: When you are in a hurry to get something done, well then, being Ambidextrous really helps :) http://www.ananthv.com/Have a lovely Friday and a wonderful weekend everyone.#Ambidextrous #Friday #CorporateTraining